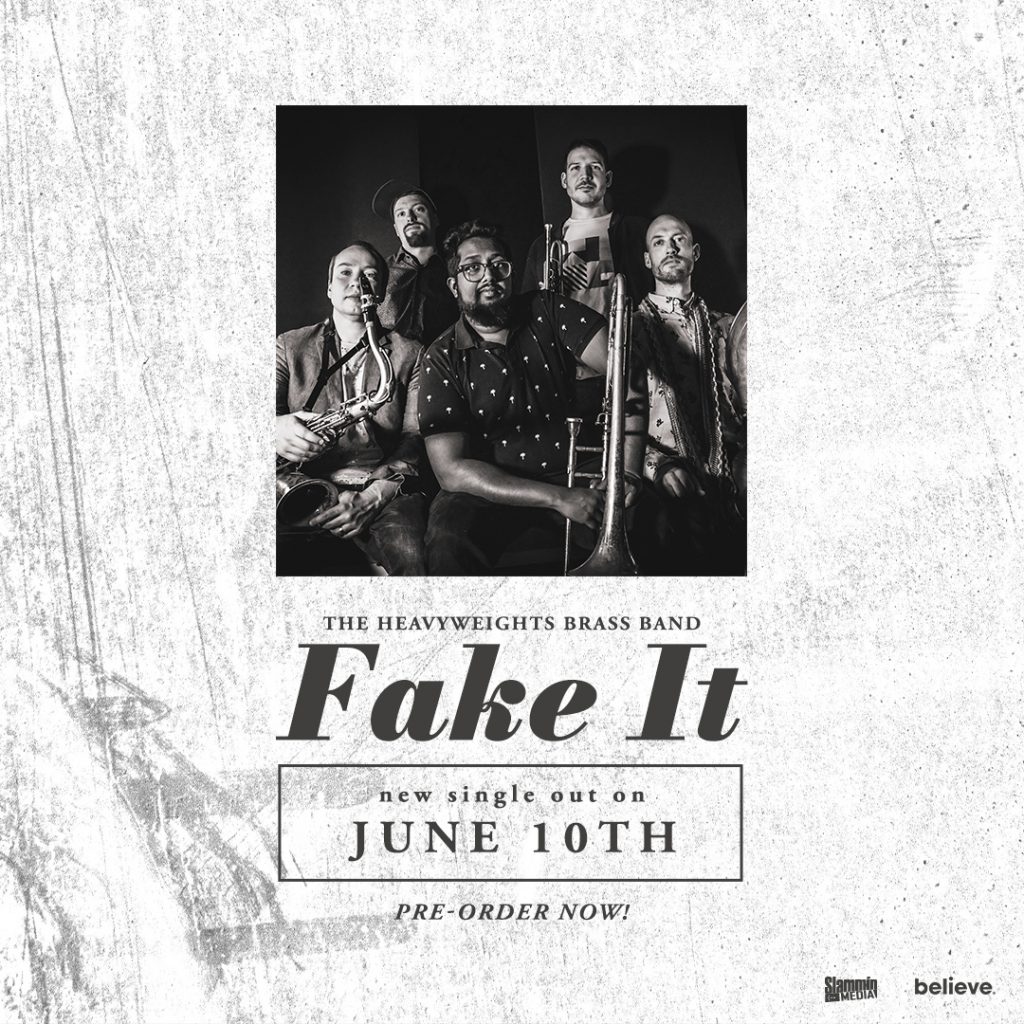 The best in brass music is full of sass, funky rhythms and snappy melodies. Toronto’s Heavyweights Brass Band has all that down and deeply in the groove with their sax and soul-powered new single, “Fake It” – available June 10.

The Toronto-based, virtuoso instrumental quintet has been gearing up to hit the road again and they’re all set to brassify your June, July and beyond with their 2022 Canadian Summer Tour. The first 16 dates have rolled out into early July with more to be announced soon.

The latest single release from The Heavyweights BB draws inspiration from drummer Gregory C. Coleman and his famous “Amen Break” solo first performed in 1969. Coleman originated it in the recording for funk and soul band The Winston Brothers’ b-side track, “Amen Brother”. It’s a rhythm pattern that is an enduring favourite in funk, hip-hop and drum and bass music.

“The song Fake It originates from the phrase “Fake It Til You Make It”, says Paul Metcalfe, one of HBB’s founding members. “It’s a popular phrase amongst the band as we often get thrown into new situations that take learning on the job. We’re always in the process of finding better ideas in the midst of recording or even performance.”

Funky and soulful with snappy horn parts reminiscent of James Brown and Maceo Parker, “Fake It” is the first original composition from The Heavyweights’ newest member, trombonist RJ Satchithananthan. Paul Metcalfe on Tenor Saxophone, John Pittman on Trumpet, Tom Richards on Sousaphone and Lowell Whitty on drums round out the full five.

“They say ‘model the masters’ and we brought that home on this jazz-funk track.”

Two years of pandemic slow down hadn’t completely stalled HBB musically. They released their fourth full length album Stir Crazy in November 2021 and spent two hot summers busking outdoors in Toronto’s west end. Then, as the music scene began to stir and wake up again, so did the group’s creative drive, leading to renewed energy, fresh collaborations and what they refer to as The Marigold Sessions. A collaboration with new friend and videographer Nick Appleton at Toronto’s Marigold Label Studios produced a trio of live performance videos and recordings that includes “Fake It”. The group also gave their takes on Duke Ellington’s sultry “Creole Love Call” and the fiery, hard grooving “Get Along”, written by HBB trumpet player John Pittman.

The Heavyweights Brass Band has been a New Orleans-inspired, Canadian brass institution bringing audiences from clubs to theatres to their feet with their exciting mash-up of original songs and unexpected covers. Their music has made it into film, commercials, radio and television and they’ve recorded and performed with some of the greats including legendary percussionist Giovanni Hidalgo, Roger Lewis of the Dirty Dozen Brass Band and Joe Lastie of New Orleans’ Preservation Hall fame.

Through extensive touring, the band has had the opportunity to share the stage with the likes of Trombone Shorty, The Roots and The Soul Rebels among many others.

When is The Heavyweights Brass Band gonna blow into town? Check out the list below of June and July dates for their 2022 Summer Tour with more being added all the time.

“Fake it” is available from Slammin Media, distributed Worldwide by Believe on June 10th on all platforms.